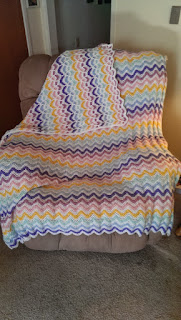 I decided I wanted to make a pastel rainbow afghan using the Brocade Ripple pattern from the book Reversible Ripple Afghans by Kim Guzman.

I used Caron Simply Soft yarn, as suggested by the pattern, as well as a J hook to ensure I didn't crochet too tight, as I did in the test squares. In addition to White, the six colors I chose are Blackberry, Soft Pink, Lemonade, Soft Green, Soft Blue, and Lavender Blue. I'm a bit sad that I decided to make the posts in white; the brocade pattern looks much nicer when the posts are the darker color. I couldn't do that with the rainbow colors though, so I had to settle for white.

I wish I could have omitted the Lavender Blue in favor of a light orange, but my local Michael's didn't offer anything other than burns-your-retinas bright orange. I also wish I had chosen a more muted yellow, but again they didn't have anything suitable.

The finished product is approximately 55" across and 72" long. Unfortunately, the couch monster ate several hooks over the course of making this blanket and I inadvertently switched to an I hook so the top of the blanket is more tightly crocheted than the bottom, but it isn't too noticeable.

Overall, I like the colors even though the purple is too dark and the yellow is too bright. I'm disappointed with the look of the white brocade pattern, so hopefully my example will help steer others away from the same mistake (or towards, if you prefer this look!). I much prefer the plain ripple side and honestly I wish I had just done that; it would have taken much less time to finish.

My cat also enjoyed the blanket even while it was still in progress. All she needs is a PopTart and she'd be NyanCat! Also being able to survive the vacuum of space would help. 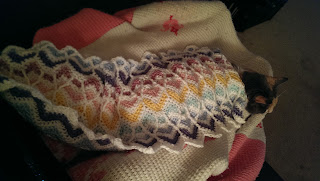