Last night I finished my Cat Corpse Hat! I used this pattern, originally by Witchy Wiche.

I made some changes to the pattern. I used the front leg pattern for the back legs instead of dealing with the triple stitches, which would have given the legs large holes for fluff to fall out. I also made the hat itself a bit shorter, as stuff touching my forehead makes me itch and sneeze for some reason. It took about 1/2 of a skein of Craft Smart Aran Fleck yarn, using an H hook. 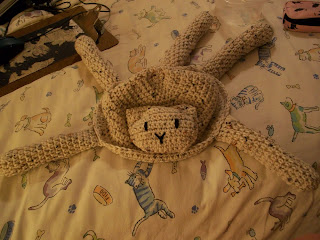 When I wore this out and about, just about everyone that saw it stared, and several commented about how cute it was!