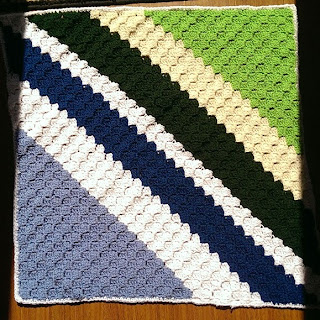 I had some leftover yarn and kept seeing fabulous corner-to-corner blankets being posted over on reddit.com/r/crochet, so I just had to try one for myself! A few tutorials I tried were confusing, but I finally found this tutorial with photos that really helped!

I had a variety of partial skeins to use for this, but in the end I decided I wanted to make it Ingress themed, so I went with a bunch of greens, blues, and whites. Luckily I only chose to make a few color bands, because sewing in all the ends was really frustrating as it was. I later started one where I had a color change every row... let's just say I abandoned that one right quick. The border is just single crochet, and the entire blanket is about 29 inches square.


Be inspired by other projects made with this pattern on Ravelry:

Here's a pic before adding the border with bonus cat paw. 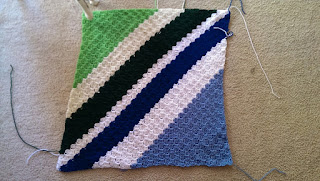