I decided to try again at making a Pinkloid. This time I used pale yellow yarn with spring green wing edges. Because my pink Pinkloid came out a bit too big, I used an F hook instead of a G hook. I hoped that would cut down on extra spacing in order to make the body more compact, and the feet smaller. 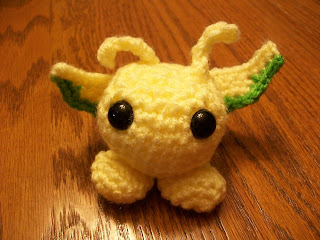 This one turned out quite a bit smaller, which I like. The first one was far too large. The feet still seemed too big, but they did look better this time. I wasn't sure how the green would look, but I think it makes the Pinkloid look Tinkerbell-esque!